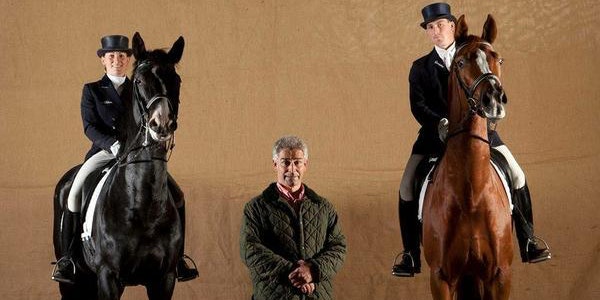 In the evening Ferdi will be joined by Michael and Maria to share their training methods with 4-5 of their horses for a great evening of entertainment and learning!

Ferdi Eilberg began his career in Germany training with Dr Reiner Kilmke and Johann Hinnemann before moving to the UK in 1980.

He took out British citizenship 11 years later and has had many successes competing in the UK.

Ferdi was also the dressage trainer to the British Three Day Event Team from 1981-1992, accompanying them to three Olympic Games.

In 2002 the British Equestrian Federation (BEF) named Ferdi as British Dressage’s new World Class Director of Coaching and then in 2003 he was appointed as the team’s Performance Manager.

In this role Ferdi was responsible for overseeing the training schedules of Britain’s top dressage riders as they prepared for major championships, including the GB Junior and Young Rider Teams. In 2009 Ferdi became dressage trainer to the Irish three-day eventing team as well. Ferdi is based in Worcestershire. In 2003 he became the second person to be granted an honorary Fellowship by The British Horse Society in recognition of his services to horsemanship.
Courtesy of Horse & Hound November 14th 2011 see article link below.

Ferdi will also be here for a clinic during the day of the 12th so any riders interested in a space please contact via office@leamsideequestrianltd.co.uk please state riding level and experience so we may structure and partner riders for the day.

Ferdi, Maria and Michael will present 4-5 of their horses and share their training methods during the evening.

What are my transport/parking options for getting to and from the event?

SatNav users use DH4 6QH to bring you past our drive.

A1M use Junct 62 and head towards A690 Sunderland.

Car share is the preferred method to avoid conjestion.

What can I bring into the event?

Catering Van will be on site but you are welcome to bring food also.

How can I contact the organiser with any questions?

email the office on office@leamsideequestrianltd.co.uk or telephone 0191 6075900.

Unfortunately refunds are not available for this event. We will however, where possible try to resell your tickets for you if such an occasion arose.